When evaluating Probiotic supplements, there are several factors that decide which will be the most beneficial for your body. The number one factor is the number of actual bacterial strains (number of different bacteria) that will come in to your body and colonize (live and thrive). As you’ll read below it’s not only important to have a certain number of Colony Forming Units (CFU’s) but also to be able to sustain those CFU’s with the proper food and nutrition. Would you send Astronauts to Space without food? Unfortunately, that’s what many other probiotic supplements do. Not only do they have a low probiotic strain diversity, but they are also loaded with cheap fillers and low quality prebiotics. This means that the bacteria in these probiotics will have nothing to live on, and they will die off quickly. This can contribute to Small Intestinal Bacterial Overgrowth (SIBO), which can have serious health consequences.

Does your current probiotic have any of these cheap or harmful ingredients?

If your probiotic supplement contains any of the above ingredients, it is a sign of a low-quality product that does not contain the appropriate micronutrients to sustain you or the bacteria it delivers. MicroBiome Restore™ contains everything the bacteria need to colonize, feed and sustain themselves in the body. This allows the bacteria in your gut to develop into a healthy ecosystem, discouraging any particular strain from dominating the others. With over 80 trace minerals and certified organic prebiotics, MicroBiome Restore™ feeds every single bacteria a complete diet of macronutrients and micronutrients, ensuring that the community of organisms living in your gut is healthy and thriving.

MicroBiome Restore™ was developed to address the ecological and epidemiological nightmare that has been created by a food system awash in toxic rescue chemistry (1) — herbicides, pesticides, insecticides, fungicides, etc. and their metabolites, poisoning the general public and polluting water supplies (2) — of which the most damaging may be products that contain glyphosate. (3) Added to this is the plague of increasingly stronger antibiotics and their metabolites, which also contribute to the problem. (4)

All animals, humans included, have a symbiotic relationship with microbes. (5) In fact, there are vital nutrients that humans cannot obtain in proper quantities without them. (6) As the food supply has become increasingly hostile to the maintenance of proper microbial balance, so has the need for probiotic and prebiotic supplementation in order to ward off the diseases and degenerative conditions that microbial imbalance inevitably brings. (7) Although proper food selections and reliance on organic sources can help minimize these effects, they by no means provide complete protection. (8)

It has been known for many years that bacteria, the microscopic animals that they are, have mineral nutritional requirements, just like we do. (9) It has also been established that microbes are ubiquitous in our geophysical environment and among its most transformative agents, leaving no element untouched. (10) They are even capable of neutralizing radioactive materials, like cesium, “which they transmute to stable, non-radioactive elements.” (11)

Conversely, those with even an elementary knowledge of probiotics know that certain bacteria (in this case, Lactobacilli, as found in MicroBiome Restore) are vital to human nutrient by enhancing the production of Vitamins A, B2, B3, B5, B6, B12, K, biotin, and bile acids. (12) Fewer know that bacteria play an important role in making vital minerals like calcium bioavailable for better assimilation. (13)(14) Many probiotics use indigestible carbohydrates like oligofructose, galactooligosaccharides and inulin to “bind and sequester the minerals and these carbohydrate-mineral complexes pass unabsorbed through the small intestine onto the colon when the minerals are released from the complex and absorbed.” (15) This can be devastating to bacterial colonies, since many micronutrients are necessary for their reproduction, and your eventual digestion when they die.

What does the USDA include in our daily mineral requirements? To the present date, the only minerals recognized as warranting consideration as human nutrients and/or nutritional labeling by the orthodox community are: boron, calcium, chromium, copper, fluoride, iodine, iron, magnesium, manganese, molybdenum, nickel, phosphorus, selenium, vanadium, and zinc, or fifteen elements. (16) The USDA recognizes the following minerals as nutrients: calcium, copper, flouride, iron, magnesium, manganese, phosphorus, potassium, selenium, sodium, and zinc, or eleven elements. (17) By contrast, the U.S. FDA, for the purposes of labelling, recognizes the following: sodium, potassium, calcium, iron, phosphorus, iodine, magnesium, zinc, selenium, copper, manganese, chromium, molybdenum, and chloride, or fourteen elements. (18) Were one to believe these institutions, one would conclude that man’s mineral nutritional needs are on par with house plants. (19)

What a coalescence of time, thought, observation, experimentation, and genius have taught us, however, is that we are not house plants. For optimal health, our needs are different. Our mineral requirements are much more varied, something that is reflected in the omnivorous human dietary smorgasbord that one finds as they travel the world. (20)

The human genome doesn’t call for 11 or 14 or 15 officially-recognized minerals. It calls for at least 64 . . . and the probiotics necessary to maximize their absorption. (21) 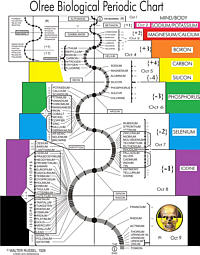 Many of the most vital minerals necessary for normal human function are not even recognized by officialdom — not by government officials, dietitians, nutritionists, or the rest of the official medical establishment. Indeed, the average person is not even familiar with these minerals, if they have heard of them at all — ever. And, of course, examples abound:

For example, yttrium (element 39) is vital to normal brain function — whose absence or deficiency leads to the body choosing calcium as a substitute, which itself leads to calcification. Lou Gehrig’s disease, Alzheimer’s, multiple sclerosis, and Parkinson’s disease “all relate to yttium deficiency.” (22) (These conditions respond to yttrium-based Bifidobacterium bifidum, an important bacterium in the MicroBiome Restore formula.)

Another completely overlooked mineral — critical to human functioning, is lanthanum (element 57). Our DNA code “calls for mass amounts of the stuff.” So vital is this element that it is called for 36,356,923 times in the sequenced genome — that we know of. (23)

Vanadium (element 23) was proven to be an essential mineral in 1971, and its deficiency is associated with “slow growth, increased infant mortality, infertility, elevated cholesterol, elevated triglycerides, hypoglycemia, hyperinsulinemia, diabetes, cardiovascular disease, and obesity.” (24)

It is beyond the scope of product introduction to delineate every human mineral need, but it is worth noting that even mineral supplementation advocate, Dr. Joel Wallach, whose work preceded that of Dr. Richard Olree by over a decade, noted that of the 79 minerals detected in human and animal tissue, at least 60 were worth considering as “essential.” This statement is supported by thousands of scientific studies. (25)

The Importance of Prebiotics:
Putting It All Together

In addition to its mineral probiotic support, MicroBiome Restore contains a superior, bioactive form of Leonardite (with a 15% Fulvic acid content) to help feed and nourish the probiotics in the formula. Humic acid is also important, in the form of humate. Our humate source is fossilized peat, derived from ancient freshwater plants. It is highly bioactive, unlike other forms of Leonardite, which have broad industrial applications, but are less unsuitable for human consumption, if suitable at all. Many probiotics do not include prebiotic ingredients, and instead use cellulose or other indigestible fillers. Many probiotics can cause small intestinal gut overgrowth (SIBO) when the bacteria are unable to build and sustain balanced colonies in the small intestine. By having a variety of different bacterial strains and a diverse prebiotic blend, MicroBiome Restore encourages an ecosystem free of small intestinal bacterial overgrowth.

Additionally, we include this form of humate, because it is effective in sequestering heavy metals, which can be found even in organically-grown sea vegetation. (26)

We feel this is the best combination for a fully functioning, broad-based probiotic / prebiotic / mineralization formula.

26 Probiotic Strains
80 Organic Minerals and Elements,
including Humic and Fulvic Acids,
in a proprietary blend of Certified Organic Prebiotics

The beneficial bacteria in MicroBiome Restore (listed below by species) are all Class I bacterial agents as rated by the American Type Culture Collection Catalogue in Rockville, Maryland (USA). In the U.S., these are legal under the Federal Register, Vol. 54 #38, 1989. Class 1 bacteria are rated as “of no or minimal hazard under ordinary conditions.”

These are LIVE organisms. While refrigeration is not required, it is recommended that MicroBiome Restore is kept in a cool environment to ensure the lifespan of this product.

* CFU = Colony Forming Units. In practical terms, the minimum number of separable cells on the surface of or in semi-solid agar medium which gives rise to a visible colony of progeny. CFUs may consist of pairs, chains and clusters as well as single cells.

Prebiotic Blend
MicroBiome Restore uses a specifically mined type of leonardite for its primary base material.

Our leonardite possesses many of the same functionary properties as Shilajit in India, which has been prized for millennia for its healthful properties.

Our leonardite’s primary composition is natural, organic humates, with a high percentage (15%) of bioactive fulvic acid, upon which healthful bacteria thrive. The primary constituent of the leonardite in MicroBiome Restore (as there are different grades) is humic acid, a bio-stimulant and itself the result of years of organic decomposition. It provides healthy bacteria with a carbon source.

The sea vegetables that compose the remaining mass of the Prebiotic Blend are listed in detail below the mineral composition section.

Mineral Composition:
MicroBiome Restore contains the following elements and trace minerals, the majority (by weight) in easy-to-absorb organic form. Some of these, especially the heavier “metals,” occur in extremely minute amounts, measureable in parts per billion, or even smaller — and yet they all contribute to the restoration of the genetic code:

MicroBiome Restore tests out as follows for the most important minerals in human nutrition. Note that quantities below are based on “per serving” (1,470 mg.). See COA: